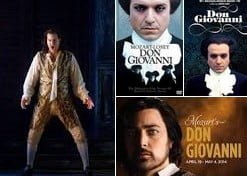 The Don Giovanni will be shown in Prague from the middle of February until June this year. The Don Giovanni is an opera in two acts with music by Wolfgang Amadeus Mozart and the libretto by Lorenzo Da Ponte.

The opera is based on the legends of Don Juan/Don Giovanni who is a fictional libertine and a seducer whose story is told by several authors. The main characters in the opera is Don Giovanni, Leporello who is the servant of Don Giovanni, II Commendatore, Donna Anna the daughter of II Commendatore who is engaged to Don Ottavio, Don Ottavio, Donna Elvira who is abandoned by Don Giovanni , Masetto who is a peasant and Zerlina who is Masetto’s fiancée. The story of Don Giovanni takes place in the 17th century in Spain about Don Giovanni who tries his chance at any women he meets including Donna Anna, Donna Elvira and Zerlina as well and in the end he gets his price for being libertine and seducing all the woman.

The Don Giovanni opera will be shown several times in the capital city of the Czech Republic in Prague. The first opera will be on Friday 13th February in 2015 at 19.00 at the Theatre of the Estates and the last on August 22nd.

For more information on other events and concerts in Prague, click the link! If you want to find out more about the opera in Rome, visit the Rome Guide.