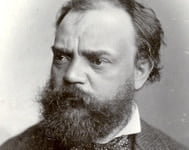 Antonin Dvorák was a Czech composer who was born in 1841 and he died in 1904. He was really fascinated by trains and he once said: “I would give all my symphonies for inventing the locomotive”.

He was really amused by trains from a really early age and as a kid in his hometown Nelahozeves he observed the construction of the first railway between Prague and Dresden. Later as an adult he used to spend time at the railway station of Prague having conversations and discussing with the engine-drivers or just simply watch the life of the train station. Around 1892 he moved to New York and he was the director of the National Conservatory of Music.