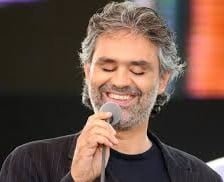 The world wide known Italian tenor and singer, Andrea Bocelli will be on a world tour from the beginning of 2015 and on this occasion Bocelli will also perform in Prague in the summer of 2015.

During his career Andrea Bocelli released 14 studio albums, recorded 9 complete operas, three greatest hits albums and he sold over 75 million records all over the world. Bocelli was also nominated for multiple awards and won several awards including a Golden Globe Award for Best Original Song. Bocelli mixes classical and pop genres good in his music.